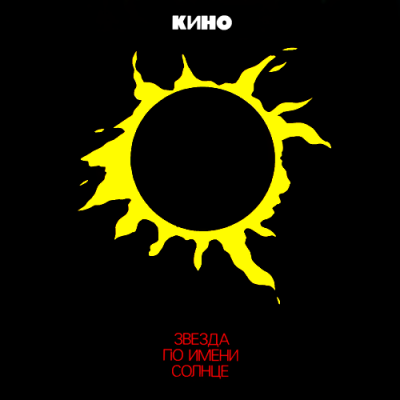 Released only a year before the Victor Tsoi's tragic death, Zvezda Po Imeni Solnce ("A Star Called the Sun") was the last album to come out in the singer's lifetime. The group's slickest release to date, the record is notable for its widening of formerly personal themes to the national and global levels. Musically, the album can be placed squarely within the territory of new wave, resembling the Cure's dreariest releases. Where earlier Kino tracks dealt with the mundane common aspects of Soviet life (taking the train at night, playing guitar in friends' apartments) Zvezda Po Imeni Solnce approaches Soviet life with more insight and distance. This is especially true of the album's title track and Mesto Dlya Shaga Vperd ("Room for a Step Forward"). Themes of dark personal struggle are also present in songs like "Nevesyolaya Pesnya" ('Unhappy Song") and "Pechal" ("Grief"), ominously foreshadowing the singer's death. Its title track was featured in one of Tsoi's iconic movies, 1988's Igla ("The Needle"), directed by Rashid Nugmanov. In the movie, set in the sparse deserts of Kazakhstan, Tsoi's character returns home collect money for an old debt only to find that his former flame has fallen prey to morphine addiction. As Tsoi's character battles the drug mafia, Kino provides the epic score for the movie. The group traveled to the United States for the film's premiere, playing its first and only American concert in New York.

by Sabrina Jaszi from www.allmusic.com